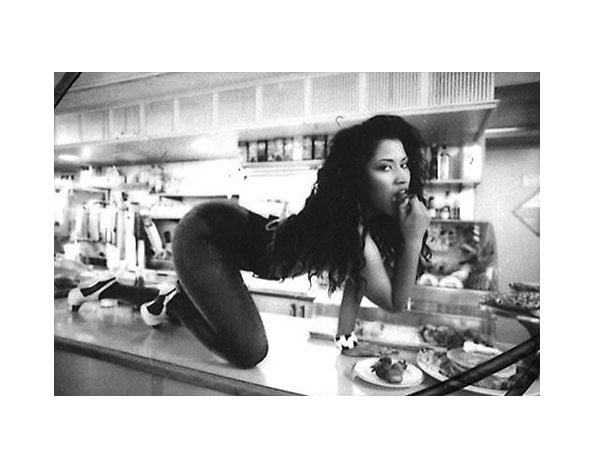 I photographed Nicki for Vibe magazine on my birthday in 2008. We shot in a random diner in Queens, they didn't close down for our shoot so customers were trickling in throughout the entire shoot. Nicki wasn't a household name at the time, her career was just beginning, so customers weren't terribly interested in whatever it was that we were doing. Everything I asked Nicki to do she did. She was more than happy to pour syrup all over herself, dip whip-creamed strawberries in her mouth, while wearing a skimpy leotard and shiny tights, sitting defiantly on the diner countertop, legs boldly, unapologetically apart. She was a fun, spontaneous— a perfect subject. Vibe photo editor, Dionna King called me "pancake tiger" for years after this shoot because that was the main direction I gave Nicki from behind the camera while we were shooting. "You're a TIGER! A PANCAKE tiger!" I snapped about 20 rolls of film of Nicki that day and almost every image is a stand-out. This isn't a normal success rate for a shoot; Nicki was a star way before she was a star, for sure.